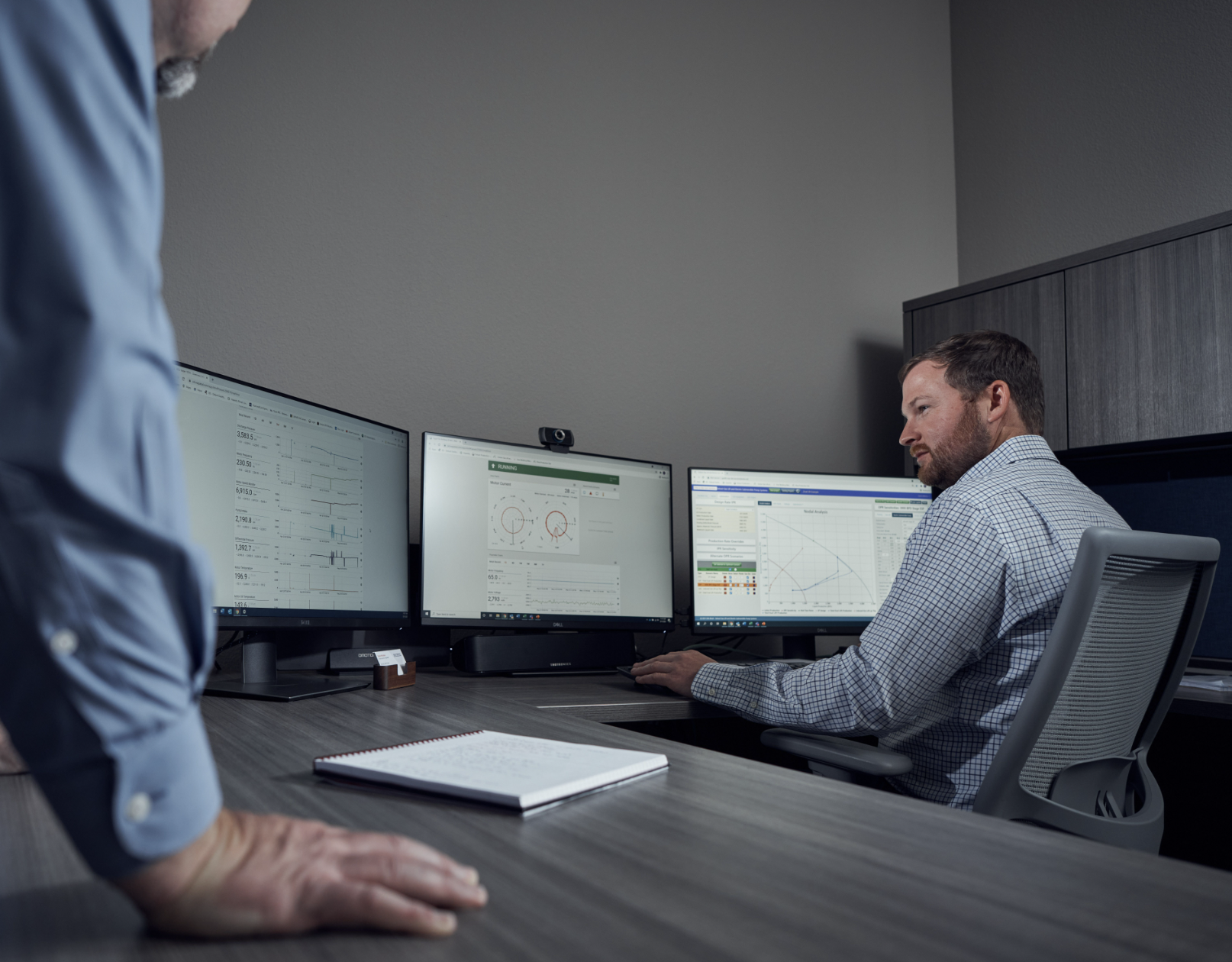 While it is great that oil and gas commodity prices are hitting 5-year highs today, producers are also dealing with some budgetary realities. Supply chain and service costs are rising while investors, public and private, are demanding a greater return on their investments. These expense-side realities are tempering the “drill, baby, drill” spending habits of previous “boom” times, making operators closely evaluate every cost they encounter. This certainly includes the balancing act between production costs and production rates in making artificial lift decisions.

Percussion Petroleum II was looking to maximize both production and cash flow from 20 Delaware Basin wells. Their existing practice was to let the wells flow back until downhole pressure dropped to the point that the wells were no longer flowing, at which time they would install either ESPs or high pressure single point gas lift (SPGL) to continue production.

They operated the ESPs at a more conservative level than is typical in the industry—causing the company to be concerned about losing too much production, both short-term and long-term.

The two main questions involved the timing; first, at what stage of production was the optimal time to install artificial lifts and second, what type of lift would then be best. The latter question involved not only the ESP/SPGL decision but also the size of ESP if that option were chosen.

Percussion’s Vice President of Production Facilities,Bryan Bugg explained, “We leveraged Extract’s XSize software to help us in making those artificial lift timing decisions and also in making the artificial lift technology decision,” in spite of the fact that Percussion already has other NODAL programs as well as reservoir engineering software. The challenge with those products is that they are completely separate, lacking the integration of ESP equipment and other lift forecasting capabilities that XSize has. This makes attempts at similar analysis very tedious and time consuming.

XSize’s ability to drill down to the details of well performance compared to the specific characteristics of each type of lift to match the right lift with the right time for the right well.

This ability to create detailed matches is no accident—it’s the reason XSize was created. As far back as 2012 it was apparent that there was something missing in the existing NODAL software designs. The need for sensitivity analysis became clear, to evaluate both cost and production factors, which are operators’ top two well-related concerns.

Most other NODAL software programs have some powerful options and often cost tens of thousands of dollars per license. While they do provide certain kinds of analysis, they generally are not set up to compare artificial lift types without extensive input by the engineer for each separate project. Plus, they are clumsy to use and therefore ignored by many engineers.

XSize was designed to integrate NODAL correlations for the purpose of sizing lift systems, using sensitivity analysis to achieve those comparisons quickly and accurately.

Extract can use XSize basically any way the producer needs. A short list of sensitivity options includes mechanical loading or production differences, free gas, electrical consumption, along with all different types of lift, to optimize costs and production.

In its history XSize started with a focus on gas lift, but was adapted to add ESPs and a growing list of other lift methods—all forms of gas lift, flowing, rod pump and ESP.

Once the type of lift is chosen, the software can run a number of types of sensitivity analyses in a matter of minutes, to make the right match. With standard NODAL software this process would require several tedious hours.

Instead, many operators’ engineers rely on rules of thumb and personal experience, which does have some merit, but cannot supply the great detail needed to truly maximize production through the best lift system analysis. In many cases, even pump vendors do not have a system whereby to accurately determine the best pump size, type or production rate.

XSize can run dozens of sensitivity analyses on a variety of types of artificial lift in a matter of minutes, instead of taking the hours or days required with standard NODAL software.

With XSize Percussion employed the engineering details of the well’s performance data to predict when to install artificial lift and to select the type that satisfied their requirements. “We wanted a microscope-level view. We wanted to maximize the well’s production through all phases,” said Bugg. “To do that, you have to get very detailed at engineering, and you have to have software like XSize that ties a reservoir model to an artificial lift model. This is not common in the industry.”

XSize first estimated the SPGL performance, finding it would likely outperform the flow back model for a 4-6 week period, after which their prior ESP performance would substantially out-produce SPGL for the remainder of the wells’ lives. Extract also advised that, because ESP would likely outperform SPGL for the entirety of the well’s life in this field, it would be more efficient to install ESP earlier and run it slightly more aggressively. This more aggressive profile would still be well within industry standards.

Percussion needed to predict each well’s lifetime production rate, to know what to design for. Then they needed to have ESP data in order to match the pump design to the decline curve. “We’re trying to maximize cashflow,” said Bugg. Having the ability to quickly run a variety of sensitivities helped them identify the best of all options.

Acting upon the XSize recommendations, the predictions quickly proved highly useful. The models proved to be very close to actual results. Bugg notes that any models that are within plus or minus 5-10% of actual production are considered highly acceptable. The production numbers were“within a very narrow bandwidth of what XSize would say the performance should be.”

The results were impressive. “The place we benefitted most from XSize was in maximizing production,” Bugg stated. There were also notable cost savings in reducing the number of lift replacements, but by far the biggest benefit came through production increases and maximizing cash flow.

As a result of this, decisions on effectively sizing anESP to optimize production, ranging across both near-term (higher production rates) and long-term (lower production rates), have become easier forPercussion’s staff. “That’s a pretty wide operating window,” Bugg notes. “We’re talking about an installation that needs to produce 3,000 barrels of total liquid per day, all the way down to 1,000 barrels of total liquid per day.”

“The reservoir model helps you understand at a detailed level the way the well will respond to ESP or gas lift or any other choice you might make—and an artificial lift model shows how the artificial lift system will perform. You have to tie those two things together to really answer the question. That’s why we use XSize with Extract. They’ve been integral to our success.”

This solves the issue they had with their own separateNODAL and reservoir engineering options.

Since joining Extract in 2018 he has primarily focused on developing his gas lift program into XSize. It is now a fully integratedNodal-based sizing package equipped to compare multiple artificial lift types under a wide array of analyses. He has also brought a new perspective to the company, based on his deep experience and technical expertise as an E&P operator.